Promotional products foster customer goodwill (positive attitudes and feelings) toward a company and its salespeople. This study, completed by Baylor University in 1992, involved a textbook publisher sending 4,000 educators either: (1) a pocket calculator plus a letter, (2) a lower-priced highlighter pen plus a letter, or (3) a letter only. 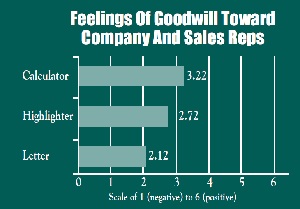 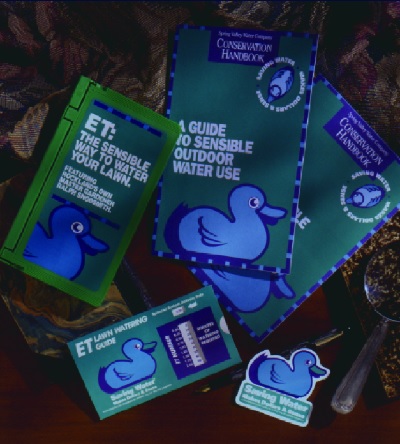 To conserve water and help customers reduce their water bills.

Water consumption during the summer had always been a great concern to one, New York county water company because of the increased usage of water for lawns and gardens. The water company targeted its 53,000 residential customers with a mailing announcing a new conservation program and a bounce-back card offering an information packet. Respondents were sent an information video tape, refrigerator magnet and a slide chart to calculate the amount of water needed to keep a healthy lawn. It was used in conjunction with a watering guide number, known as ET (Evapo-Transpiration), that was published daily in the newspaper and based on rain and humidity levels.

Anticipating an 8% return, the advertiser actually received a 15% return (7, 950 responses). Projections indicated that approximately 5,000 gallons of water would be saved per participating household, thereby passing on a savings of $75, each based on an average $200 water bill for summer months.

At Ads-Up Promotions our goal is to provide you with Promotional Products that meet or exceed your expectations 100% of the time. We do everything in our power to create a product with which you are 100% satisfied.